Today is launch day for the Apple Watch.   I just thought I should share that since chances are it isn’t being covered anywhere else and you might have missed it.

I’m one of the lucky/foolish ones who set a pre-3:00 a.m. alarm on April 10th so that I could get my order in … and as a result I managed to get a ‘Day 1’ delivery window.   From all reports, the stock of watches available for day 1 delivery was gone in mere minutes, so I feel pretty lucky that I made it into the first group to receive the watch.

As soon as the UPS truck dropped off my watch today, I went through the setup steps for the watch, and installed The Sorcerer’s Apprentice App software onto the watch.   I’ve been working on this software for a while and while it’s only a very small subset of the functionality available on the phone, I think it is a nice complement to the full-featured app and gives just enough information at a glance to remind players of the info they want to know between active encounters with the villains. 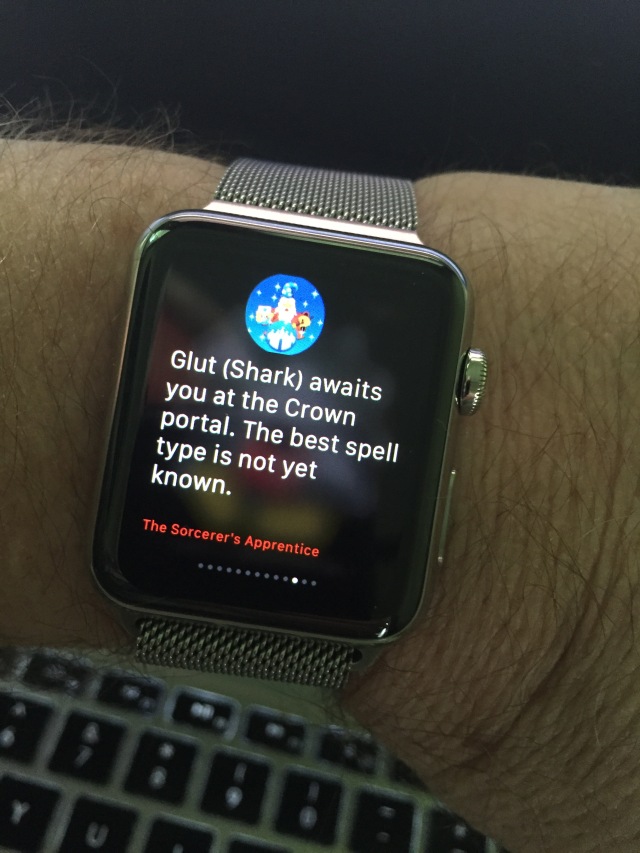 I’m really looking forward to being on-site at Disney World next week to run the Expedition Everest Challenge 5K and to test the app in the field and make sure the integration of the watch with the iPhone app is seamless and operating as expected.

I had really hoped to get the finished software into the App Store for launch day, but even though I submitted early, it’s still in the queue for final approval, and until it gets that final stamp of approval it won’t appear in the App Store.

Given the constrained supply of Apple Watches for launch day delivery, I’m still hopeful that the software update will be available before most users actually have the device in their hands … if there are any updates on the process to share, I’ll certainly post updates here.

If you’re at the Magic Kingdom on May 2nd, maybe I’ll run into you at the portals.

This entry was posted in Apple Watch, iPhone Apps, The Sorcerer's Apprentice, Updates. Bookmark the permalink.